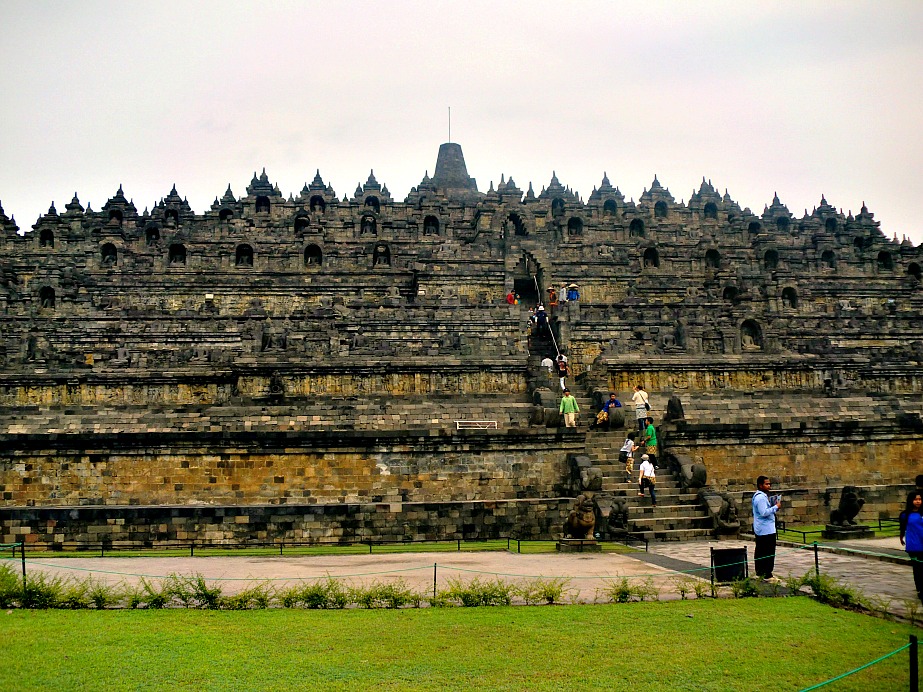 Before embarking on this trip to Java, I did a little research on the the main attractions of Jakarta and the cultural pride of Jogja. Being world heritage sites, Prambanan and Borobudur were instantly on the list. I saw photos of both, and I couldn’t understand why the latter was more appreciated than the former, when Prambanan seemed to be stunningly beautiful. I read traveler reviews saying that it was probably because the two temples were squeezed into a one-day itinerary, and seeing Borobudur before Prambanan caused you to feel already exhausted by the time you arrive in the latter. Probably.

But as I think about this now, it’s not the case. As what I said in my previous post, Prambanan was beautiful was beautiful, but as you get closer, it loses its charm. I don’t understand why, but that’s the way I felt about it. When I was looking at Prambanan from the shuttle to Ratu Boko, or even while dining at the Ratu Boko restaurant, I felt that I was seeing something so mysterious, like a newly re-discovered lost civilization; yet, when I was directly standing in front of the Shiva temple, I didn’t find it as beautiful as I expected.

Since this was the general feeling that enveloped me, and given that I really believed that Prambanan was more beautiful than Borobudur, I expected little of Borobudur. Dwi picked us up from The Phoenix and we headed north towards Borobudur. On the way, we saw the beautiful Mount Merapi. It was almost a perfect cone, yet with a little lump on its side. This instantly reminded me of Mayon Volcano, albeit Mayon was really perfect.

After 45 minutes of driving, we arrived at Borobudur. Like Prambanan, there was a different gate of entry for foreigners. Before even entering the complex, a piece of batik cloth was wrapped around your waist to cover your legs, much like a sarong. After which, we walked toward the temple.

The path which led to the temple was amazing – the path was covered in stone bricks, where trees and plants grew along its borders. As we got nearer the temple, we caught a glimpse of Borobudur, and boy, it was massive! I was excited. I was stunned. Beautiful. Gorgeous. Awesome.

It was no joke when they said that Borobudur was huge. It really was! We couldn’t even shoot a the temple’s body in one frame. After climbing a short flight of stairs towards the main temple, off we were to witness one of the greatest temple ruins ever to be re-discovered.

We chose to go around the temple as suggested: go around each level clockwise, until you reach the topmost part. Never had I seen so many Buddha statues in my life. The relief sculptures were superb. Yet, I was a bit disappointed to see that there were blank blocks of stone — probably ready to be chiseled to imitate the original ones as part of the preservation efforts. While I understand that preservation is necessary, it sunk my heart knowing that the temple I was standing on was just partly authentic, and I was not sure whether most parts of this temple were part of the original structure or if they were just re-created recently.

Anyway, we got to the top, where a Buddha statue was housed on each bell-like structure. In the middle of the top level was the giant Buddha, which we didn’t get to see. I have to admit that I was more impressed with the relief sculptures on the lower levels than with the Buddhas on top floor. But overall, Borobudur was amazing!