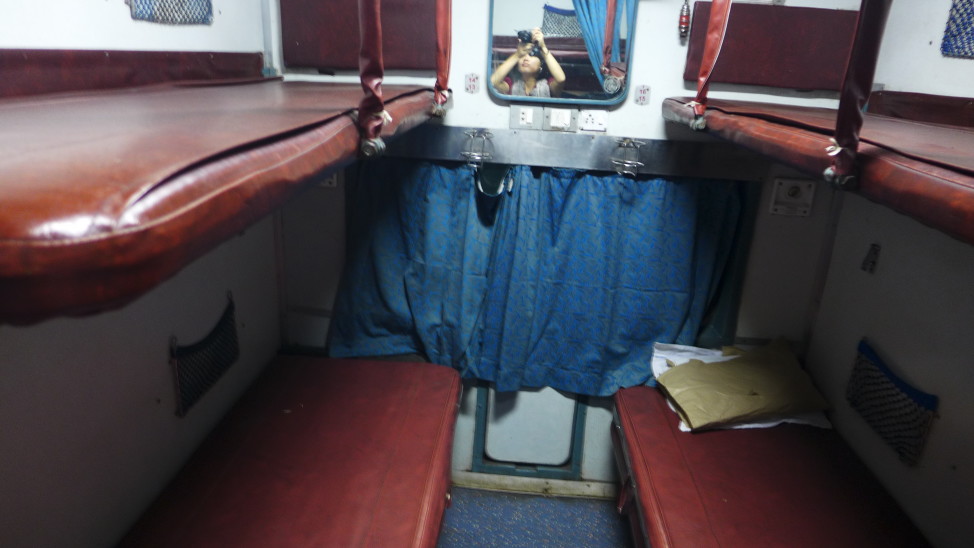 On our final day up north, we woke up early for yet another long day of travel. From Agra, we caught a train for Delhi. This time around, we booked ourselves in sleeper coaches to gain some much needed sleep. Though not as good as the Shatabdi Line, the Intercity Express was fair enough for the price. Four hours later, we were in Delhi.

Once we exited the train, a great deal of people seemed to be in an exodus toward the city. We headed to the city train station, so we can grab a ride to the Akshardham Temple. Though chaotic, we managed to retrieve tickets and squeeze our way inside the station. Fortunately too, there’s a segregation policy in place, where several coaches are designated only for women. A few stations after, we were near our destination.

Since we were carrying our backpacks with us, we opted to ride one of the rickshaws to bring us to the temple. What surprised us was what followed.

Like the Iskhon Temple in Bangalore, this temple was very strict when it comes to visitors. But here, almost nothing was allowed. First, you deposit all your belongings, except for your wallet. I was thankful to have my pack off by back, yet disappointed not to have any camera with me. As you deposit your stuff, they take your photo. Then, you proceed to a body check, where the guards check almost every nook and cranny of your wallet! By the time we got inside, I had lost the excitement I once had in seeing this place.

Arches with relief sculptures welcome you into the complex. There were signs trying to explain what these sculptures are for. The place, though manicured, made me feel as though I was dropped in the desert. We reached the fountain where the founder’s foot print in the bottom. Then, we had our first glimpse of the Akshardham Temple.

Like most places we visited, this one was another showcase of Indian architecture. Relief sculptures of gods and goddesses, as well as some holy animals, could be found on its walls. A moat surrounds the temple, where a walkway could be found on its outer ring. We sat down on a bench in the walkway to admire the temple. Though staggering in size and design, I was underwhelmed with its beauty. This was built a few years back, where equipment and tools were already abundant, whereas the older temples were as grand (or even more) than this.

We took a few steps and saw one hall being renovated. Artists were painting the columns with gold. After we had a full turn around the exterior, it was time to go inside.

While the exterior used mostly yellow sandstone, inside was a different story. It was made mostly of marble. The infinite relief sculptures were still there. At the center were statues of the founder and the subsequent leaders of the sect, all in gold. Paintings of the religious heads were scattered across the hall; personal articles of the founder were also displayed. It was a temple and a museum merged into one – the reason that students were here for a field trip!

In time, we left the temple, retrieved our bags and headed for the airport using Delhi’s Airport Express. It was already past 7 pm when we arrived in Bangalore, but we were so excited to back in what felt like home already. 🙂 This ended not only our journey up north, but our southern sojourn as well. On the next day, we were on our way back to Manila.

2. The same goes for train tickets. Lucky us, we had a friend who lent us an Indian sim card, which we used in registering for IRCTC and Cleartip accounts. AC chair cars (reserved seating) are fine for journeys of about 4-6 hours. Otherwise, book an AC sleeper car. I loved the Shatabdi line. It’s fast, and very clean and comfortable. Bring an eye mask as they don’t always turn the lights off. Yes, even at night.

3. Settle the price of the ride before getting on an auto-rickshaw. Remember to haggle!

4. Ask the hotel to pick you up from the railway station or the airport. It’s safer this way, especially if you’re arriving late at night. Otherwise, opt for the prepaid taxi stand. They’re better than the touts.

6. Dress conservatively, especially for the women. Buy a kurta or two if you can spare a few hundred rupees (a cotton one shouldn’t cost more than 300), which you can pair with leggings. Locals respect you more if you dress up like them.

8. Avail of guides, a person or an audio one, when visiting a historical place. If you don’t want to pay, you can always read about the place before going. That way, you’d appreciate the place more.

9. Take the spare change. You’ll need them in paying for the use of public restrooms. Don’t forget your sanitizer or alcohol.

10.Talk to the locals, especially the old people. They have lots of interesting stories.

How much it cost us

Here is the breakdown of our expenses. I hope it gives you a guide in budgeting if you’re planning a northern India trip. 🙂

Until next time. Happy travels!