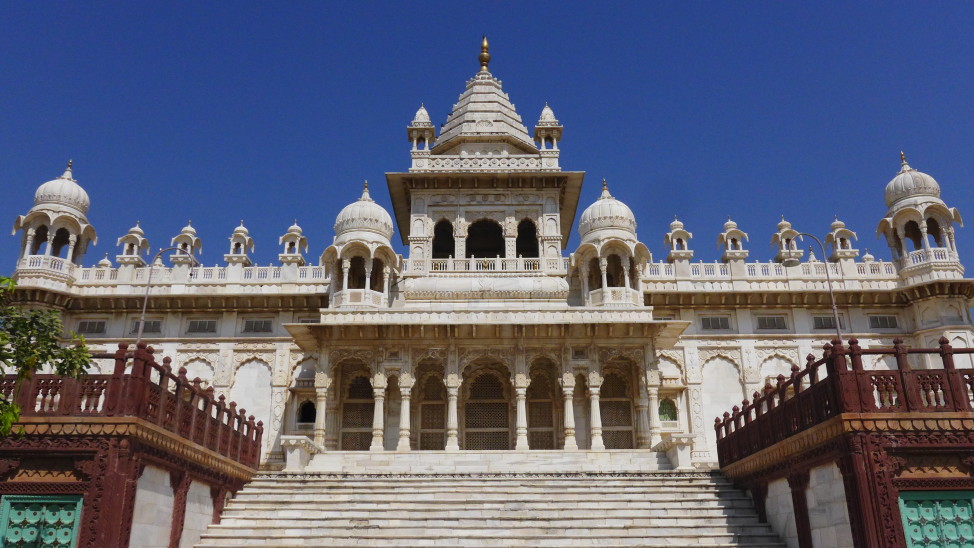 This is the final portion of our second day in Rajasthan. You may check the first part here.

Jaswant Thada is on the way to the Mehrangarh Fort, but since we didn’t have time the previous day, we just came back for it. This is a memorial to one of Umaid Singh’s descendants. The blue city could be seen from the top, and it is surrounded by dry mounds of red land sparsely covered in grass. As you enter the complex, a folk musician plays his instrument, as if a royalty is being welcomed in the place. Like many other places in India, this didn’t disappoint when it comes to intricacy of the design. There was not much to see inside though, but the exterior was a blessing to the eyes. What felt better was that this wasn’t as crowded as most tourist spots in Jodhpur (and definitely less populated than the streets)! However, coupled with the fewer number of visitors was sad truth that this was also less maintained than the other spots in the city. A disappointment, I must say, considering that this was also a very beautiful place.

We took our time to just sit in one of the shaded areas, feel the breeze against our skin and watch the other people go by. The feeling was surreal. I still couldn’t believe that I was standing in Jodhpur.

When we got out, there were no auto-rickshaws waiting. Crap. We didn’t have a ride back to the center of town. It would be about a kilometer and a half if we walked, but in the sweltering heat and no water in hand, we weren’t sure if we could make it. Luckily, when we got to the main road, there was an auto-rickshaw that passed, and gladly drove us to Jhankar restaurant.

After lunch, we headed to the market to buy some spices and embroidery. Of course, buying in a market in India would never be complete without the haggling! I got a few more spices and a long embroidery piece. As we were walking around, we saw a shop claiming to be renowned for its embroidery work. There were lots and lots of embroidery pieces hanging on its ceiling and walls. It took a lot of time before the shop owner was able to assist us, since he was busy with his other customers, albeit I was happy enough to go through the various designs of cushion covers that were uniquely Indian. At some point, I was even thought to be the vendor!

Our long and slow day ended with a glass of iced coffee in the rooftop restaurant in Pal Haveli, as suggested by the embroidery shop owner. Service was very slow, but the drink was refreshing enough to end our sweaty afternoon. We walked back to the guesthouse to get our bags, and were on our way to the train station in no time. As we got off from the auto-rickshaw, dozens of pairs of eyes were watching our every move. Soon, we entered the terminal and didn’t know where to go. Luckily, there were police all over the place, and they were helpful in pointing out where we could find our train. Though pairs of eyes continued to stare at us, I was more overwhelmed with the busyness of the platform, along with crowded state of the chair car (the unreserved seats), where people were literally spilling out of the coach!

We entered our A.C. chair car, unsure of whether we rode the correct coach, and people were pointing us where to sit. We met three Indians who were glad to tell stories of Indian life. Bright was the coach and noisy were the kids, you couldn’t possibly sleep during the four-hour journey to Jaipur. Our train was delayed in arriving in Jaipur, nonetheless we were glad to have arrived safely.

Lost. Again. A crowd of people were streaming by us. We followed one of the locals we met earlier on the train, and exited the station on our own. Our mistake. A tout followed us the entire time. I assumed that there was no one from the hotel to pick us up since it was already past 11 pm, so we had to take our own transportation. The prepaid taxi stand was already closed, and the tout kept on insisting that we ride his auto-rickshaw. Crap. We went out of the complex, hoping to find transport, but more people crowded on us when we asked whether they knew Pearl Palace Heritage. Desperate, we called the hotel and were informed that someone had been waiting for us since our supposed arrival time. Luckily, he was still there when we got back to the station and promptly drove us to the hotel.

A good night’s rest was what we definitely needed.

More on Jaipur on my next post. Happy travels! 🙂