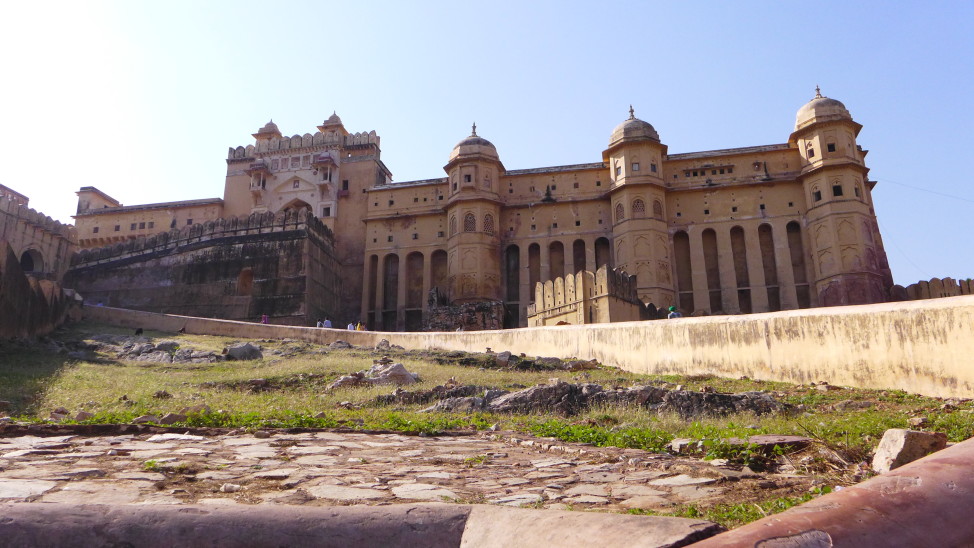 This is the second portion of my tale about our Jaipur day tour. You may check the first portion here.

Salim told us that our next destination was somewhere serene and peaceful. He asked us to guess where it was and Jo answered the cemetery. True enough, we exited the Pink City and headed to Gaitor Gate, the memorial dedicated to the Rajputs of Jaipur.

Like the watch tower in the Pink City, this wasn’t visited as much by the tourists. We were very few, and we were all foreign to India. Here were some of the most intricately carved memorials, most of which were made of marble. Two old men were present, telling us that they could take our photos. I declined their offer, knowing that I didn’t want my photo to be taken in a memorial. It annoyed me that they were so insistent such that I had to raise my voice for them to back off.

Anyway, we escaped them by going into the inner courtyards. The structures get bigger and better as you make your way deeper into the complex. The sad thing was that some of the structures were not maintained properly, with black dust lining the crevices of the roof.

We headed for lunch after the short visit to the memorial, then drove past Jal Mahal and Jaigarh Fort along the way to Amber Fort. Amber Fort was the home of the royalty prior to transferring in the City Palace. It was a massive structure you’d see on the way to its entrance. While you can take an elephant or a jeep to bring you up, I found that walking to the fort could also prove to be worthwhile. Tiring as it may be, you could find interesting things on your climb, such as the town in the valley, the walls on the hill across the fort, and the ever lively locals also making their way to the top.

A huge courtyard welcomes you as you enter the fort. Hidden were the stairs leading the way to the main complex, but as you see it, you’d be amazed by the art covering its façade. I was already amazed, but by the time I entered the main complex, I was more dazzled with the greatness of Indian architecture. On my right was a hall that was so beautifully decorated that I had simply nothing to say but wow. We took our audio guides (it really pays off), and went on to explore more of this majestic fort.

I was posing for a photo when a man approached me. I initially thought that he was asking me to take his photo, until one of his companions stood by me and somebody had our photo taken. We thought that was the end of it, but no. As I walked up the steps, I was stopped again, asking if they could take a photo with me (I feel like a star), to which I obliged. The last guy even asked me to put my hand on his arm – this time I already said no. I still have no clue what those photos are for, but it sure made me feel like somebody famous! Hahaha 🙂 Let’s charge that to experience.

We entered another courtyard; this time, a manicured garden welcomed us. We headed to the right where we were shown how the royalty lived. What followed was my personal favorite in the fort – the Hall of Mirrors. Each square foot of that hall – including the ceiling – was covered by mosaic tiles and mirrors that I couldn’t help but be mesmerized by its beauty. It was truly over the top, yet wonderfully so.

We headed to the upper floor, but there were less to see. We circled the top floor, until we couldn’t find where to go anymore so we just went down and asked a guard on duty. We proceeded then to the next courtyard, the zenana, where the women were staying. True to its purpose, the walls were colored pink, albeit they were poorly maintained. There were still remnants of Hindu paintings covering its walls, but it’s left to sheer imagination as to how grand this part of the palace must have looked like.

As the sun was beginning to set, we left the wonderful Amber Fort and called it a day.

Agra will be up next time. Until then, happy travels! 🙂