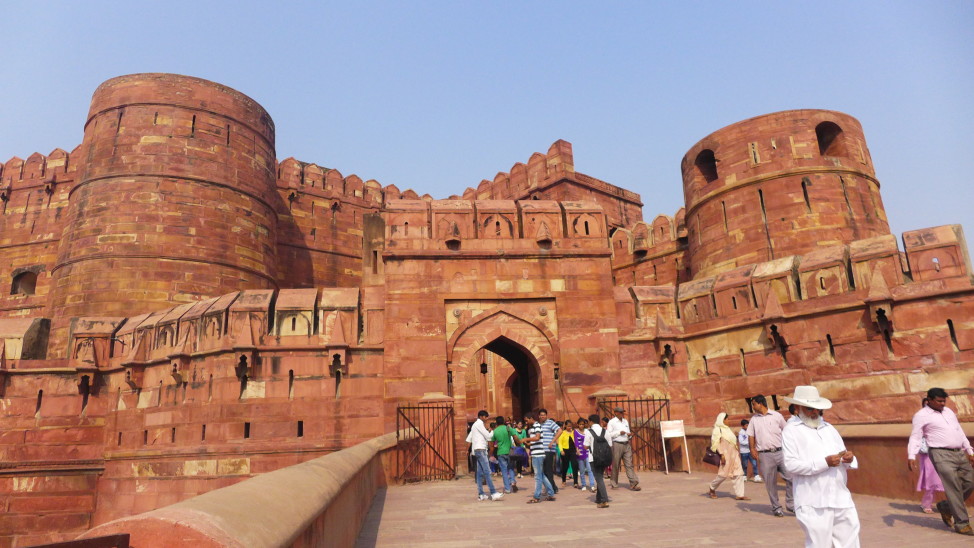 This is the continuation of my Northern India journey. You may check out my posts on Jodhpur and Jaipur here and here.

We departed Jaipur in a haste, as we got up later than expected. We were to catch the train bound for Agra that morning. Luckily, we were still early by the time we arrived at the train station, plus we knew how to ride a train in India at this point.

The good thing here was that we were able to book seats in the Shatabdi train, the most comfortable train we’ve tried. The coaches were new and food was included in the ticket price. Unfortunately though, we were seated across a Czech couple who were busy displaying their affection (we were in the middle of the coach where the passengers face one another). Though I was accustomed to this scenery, it took some time for me to swallow it then after being in conservative India for more than six weeks already!

Four hours later, we arrived in Agra Fort station – the station in Agra where most trains to/from Rajasthan depart/arrive. As we exit the station, we were greeted by a hoard of touts offering their taxis or auto-rickshaws. Again, we went back inside the station, but it was too bad that the police just pointed us to one of the drivers. He offered his taxi, but since the price was pretty hefty, we asked one of the auto-rickshaw drivers for a competitive price. With a difference of 50 rupees, we went ahead with the taxi to bring us to our hotel, Radisson Blu.

Our driver asked if we want to take a tour around Agra, to which we definitely responded positively, agreed on a price for the auto-rickshaw as they advised that some roads were too narrow to be navigated by a car, and asked him to come back before lunch.

Checking in was a breeze in Radisson, and we were thankful for the room upgrade! 🙂 We had lunch in the restaurant, where food was delicious and the servings were humongous!

After that, we met with our taxi driver, who introduced us to Uncle Moin, our driver for the day. There were only two things in the agenda for the only day we have in Agra: Agra Fort and Taj Mahal.

He dropped us at the entrance of Agra Fort, where of course another flock of guides offered their services. We went ahead inside and bought tickets. It was funny when I asked for ‘do’ suggesting I needed two tickets, the man told me to buy from the ticketing counter for locals!

A giant lawn greets you welcome as you go beyond the gates. The façade of the palace is a wonderful mix of Hindu and Islamic architecture. Red sandstone was predominantly used, striking in sharp contrast with white marble. We first entered the Hall of Private Audience, passing by where the Hindu wife of Jehangir lived. The designs were screaming its elaborate Indian heritage. It was followed by a tour to a series of rooms where the emperor and his concubines played. In one room, our guide showed us how you can talk to one another when speaking to the wall on the opposite corners of the room! 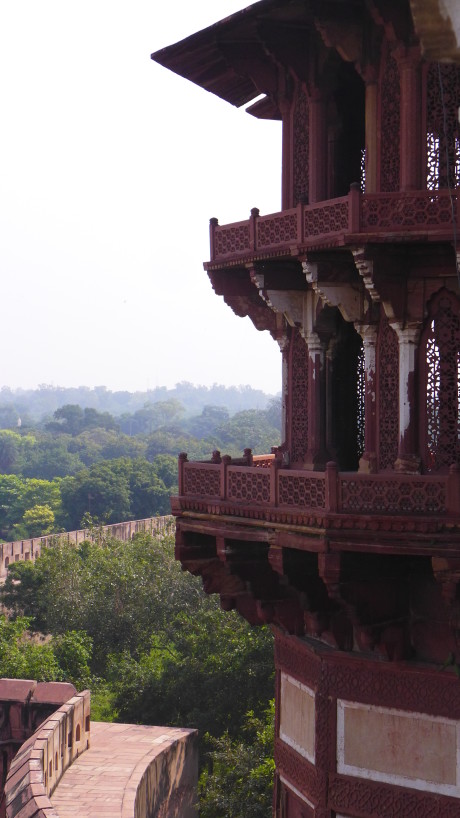 Soon, we were entering the place where the Muslim wife of Jehangir resided, and it was mostly made of marble. I got my first glimpse of the Taj Mahal here – and it was very depressing. Thereafter, we saw were Shah Jahan was kept captive by his son Aurangzeb. Afterward, we were brought to the courtyard where Shah Jahan met Mumtaz Mahal.

To end the visit, our guide took us to the Hall of Public Audience, nestled in a manicured garden. It was also said that you couldn’t turn your back on the emperor here, otherwise you’d leave without your head!

As we ended the tour, we asked our guide for our tickets. He was hesitant to give them at first. We said that we wanted them for souvenir, since I have an inkling that they would be reselling them as the tickets weren’t punctured. He finally gave in, giving us each one of the two tickets required for entrance. Beware of this, fellow travelers! 😉